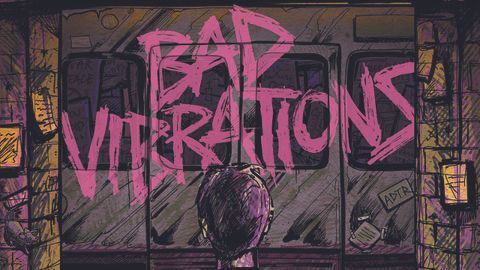 The promises that Bad Vibrations would be a heavier follow-up to 2013’s Common Courtesy come to fruition – on half of the album at least.

The title track opens with Jeremy McKinnon’s impassioned roar to ‘Pick your poison/Live with remorse’ as he tears through a song about battling the bollocks that life and the people in it can occasionally throw your way. Lyrically, it’s an instant connector, and it’s on the thrashier punk side of things, as is Paranoia.

If you’re a certain age, Naivety will make you feel nostalgic and a bit depressed as Jeremy contemplates the good old days of unjaded childhood dreams. Reassemble’s deep introductory echoes mark it out as the metalcore cut, while Justified is ADTR in their emo guise, all brightly melodic guitars and emotionally battered lyrics. The first half of the album runs on anger and defiance while the second half is the band dropping their defences and having a good cry. Is the weepy closer Forgive And Forget, complete with a string section, overkill? Depends how emo you are.