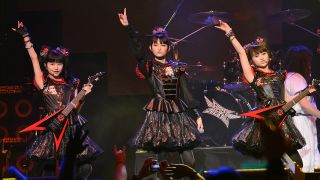 Yui Mizuno, aka Yuimetal, is still a member of Babymetal, according to a spokesperson from the band’s US management company.

There had been speculation that the 18-year-old was no longer part of the Japanese outfit after she failed to join her bandmates Su-metal and Moametal at their show in Kansas City earlier in the week.

Instead, the duo were joined by two additional dancers, leaving a question mark over Yuimetal's position in the band.

But a spokesperson for 5B Management has now addressed the situation, telling Alternative Nation: “Yuimetal remains a member of the band, but she is not on this current US tour. There is a new narrative for the future of the band which is currently evolving. The storyline has changed.

"This was the basis of the Metal Resistance Episode 7: The Revelation video. The who, when, where, and how of The Chosen Seven will be presented as the concept unfolds."

Earlier this week, Babymetal released a video for their new track Distortion, with their next live show taking place tonight (May 11) at Houston’s Revention Music Centre.