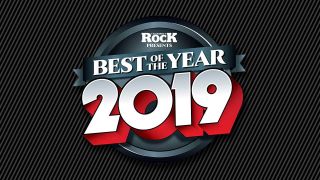 It’s time for our annual look at what went down in rock over the past 12 months – the new albums and songs that got us excited, the reissues that shed new light on old favourites, and much more besides.

We caught up with some of rock’s movers and shakers – Ronnie Wood, Jeff Lynne, Joe Elliott, Duff McKagan, Glenn Hughes, to name but a handful – who have been pivotal this year, and got them to take a look back over their past 10 years too.

This issue also comes with a free Best Of The 2019 CD, including The Wildhearts, Status Quo, Black Star Riders, Alter Bridge, Airbourne and more. And there's a free 2020 wall calendar, featuring 12 months of iconic pictures of some of rock's biggest stars.

The spectacular end of year edition of Classic Rock is on sale now.

That Was The Year That Was 2019
Another year over (just about), and again it’s one in which there have been fantastic new albums and lavish reissues. We look back at the standout new releases and the best reissues, and on page 80 we remember those who have sadly left us during the past 12 months. We also talk to some of the artists for whom 2019 (and the last decade) has been one to remember, including…

The Wildhearts
Given a career in which they’ve constantly hit the self-destruct button, it’s surprising that The Wildhearts are still here. Not only that, they’ve also released one of the year’s best albums.

Jeff Lynne
The songwriter, singer and multi-instrumentalist looks back at a long and hugely successful career, which has seen him lead ELO, work with The Beatles, be in a band with Bob Dylan and Tom Petty… All this and more in the Classic Rock Interview.

Def Leppard
A Hall Of Fame induction, a Vegas residency, a new Down ‘N’ Outz album… It’s been a busy year for Joe Elliott.

Steven Wilson
Over the past decade he’s shifted through a range of musical guises. Here he reflects on the genius of Bowie and Zappa, married life, and why it’s good to talk bollocks.

The Struts
With the band, frontman Luke Spiller has gone from playing tiny shows for crazy French fans to rubbing shoulders with rock’s A-list – not wasting a single opportunity along the way.

Glenn Hughes
The Voice Of Rock on living in the moment, beating his demons, the challenges of a vegan Christmas, and how he’ll be “going global” in 2020.

Steve Hackett
One of prog rock’s most prolific mavericks talks about 10 fruitful years, and rubbing vinyl shoulders with Madonna.

Beth Hart
The rock’n’soul powerhouse reflects on a decade of surreal highs, painful lows and finding peace with gardening.

What's on your FREE CD?

Best Of The Year 2019
A lot of great rock tracks came out this year, and we’ve assembled 15 of the very best right here, including The Wildhearts, Status Quo, Black Star Riders, Alter Bridge, Airbourne and more…

The Soundtrack Of My Life: Steve Hogarth
The Marillion frontman on the special records, artists and gigs that are of lasting significance to him.

Classic Rock 270 is in UK newsagents now, and available to buy online. You can subscribe to Classic Rock below.