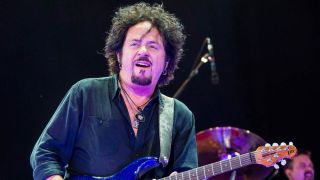 Steve Lukather says Toto’s summer co-headlining tour of North America with Yes is the perfect musical fit for the band as both acts adjust to the loss of key members this year.

Following his 2007 retirement from touring after being diagnosed with Lou Gehrig’s disease, Toto bassist Mike Porcaro died in March while Yes bassist Chris Squire passed away on June 27 from leukemia.

When the tour was first announced, Lukather declared Yes as the group’s musical heroes and the pairing a “crazy dream come true”, and now says the losses have only served to further strengthen the personal bond and mutual respect between the two bands.

Lukather tells Ultimate Classic Rock: “There’s a greater connection there than people realise. We’ve worked together in various configurations. And then both of us have suffered a tragic loss at the same time – we lost Mike Porcaro and they lost Chris Squire, sadly. He was a hero of mine.

“I used to line up when I was a kid to get tickets to see the Close To The Edge tour at the Forum in LA. Steve Howe is one of my all-time guitar heroes, and we’ve worked together in various configurations. Geoff Downes and I worked on Asia records and Steve Porcaro was in a band with Chris Squire briefly, with Billy Sherwood, who is filling in for Chris.”

Lukather hopes both sets of fans on the tour will like what they see from the two acts.

He adds: “It’s not as weird as the casual person might think. And also, musically speaking, we’re hoping that the Yes fans going, ‘Africa, I don’t like that song,’ when they see us play, they might go, ‘Whoa, man, this is a lot different than we thought.’ Even though we are going to play Africa and all of our hits. There’s a lot more to our band than just that.

Toto are on the road in support of Toto XIV, their first album in nine years.