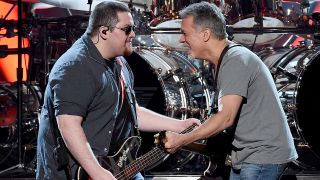 Roth hit the headlines last week after telling the New York Times that he was unsure if Eddie would ever tour again.

“I don’t know that Eddie Van Halen is ever really going to rally for the rigours of the road again,” said Roth. “I don’t even want to say I’ve waited… I’ve supported for five years.

“Because what I do is physical as well as musical and spiritual – you can’t take five years off from the ring. But I did. And I do not regret a second of it.

“He’s a band mate. We had a colleague down and he’s down now for enough time that I don’t know that he’s going to be coming back out on the road.”

Loudwire posted their story on Instagram under the headline David Lee Roth doubts Eddie Van Halen will ever tour again – and that led Wolfgang to respond in the comments section, saying: "Yeah, I don’t really think that’s up for him to decide.”

Roth also reported back in January that Eddie was “not doing well” – a comment which came after much speculation surrounding the guitarist's health, with some online reports suggesting he had undergone treatment for throat cancer.

Wolfgang, meanwhile, is continuing to work on his debut solo album – but recently reported he was expecting “a wave of hate” because his music won’t be what people expect.

Asked online if he viewed his father’s legacy as a gift or a curse, Wolfgang replied: “That’s a great question. It’s really equally both. Being who I am, I think people at least will be interested in what my work will sound like, which is very nice.

“But on the other hand, if it’s not exactly what they want to hear or if I don’t try to sound ‘Van Halen-y’ enough for them, they’ll hate me and won’t give me the time of day.

“I’m fully prepared for a wave of hate when my music releases because it won’t be what people think it’ll be. I’m not trying to be my father, I’m trying to be me.”

Wolfgang replaced Michael Anthony in the Van Halen lineup in 2007 and has also recorded and toured with Tremonti.

I answered a question in my story about whether or not I view my father’s legacy/reputation as a gift or a curse and this is what I said. Judging by the response, the answer seemed to resonate with many so I figured I’d make it a post. Thanks for being cool, y’all. Excited to get this music out. #WVHAlbum Wolf Van Halen 🐺🚐🙌