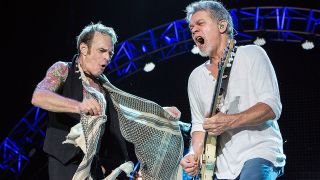 The vocalist was in conversation with the Las Vegas Review-Journal about his residency in the city, when he spoke about his decision to take on the run of shows with Van Halen’s future up in the air.

Roth says: “Ed’s not doing well, and singing and dancing is a perishable skill. If you have the capacity, it’s something that has to be used routinely, if not for the thrill of it and the magic of creating with other incandescent spirits.”

Roth’s comment comes after much speculation in recent months about Eddie Van Halen’s health, with some online reports suggesting he’s been undergoing treatment for throat cancer, although there’s been no official news from the guitarist’s camp.

In September last year, Roth caused a stir when he said he thought Van Halen was “finished” with the vocalist adding: “Van Halen isn’t going to be coming back in the fashion that you know. That being said, Eddie Van Halen’s got his own story to tell – it’s not mine to tell.”

In October, Eddie and his son Wolfgang attended Tool’s show at the Staples Center in Los Angeles.

There was a light-hearted moment when one fan approached the musician at the venue, not to request an autograph, but to ask Eddie to take a picture of him with the stage in the background – with the guy completely oblivious that he was talking to one of the most famous guitarists in the world.

Van Halen: The Japanese Singles 1978-1984
This 13-disc collection of singles that were originally released for the Japanese market recently launched around the world, featuring classics including Jump and Panama.View Deal