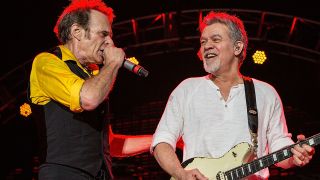 Roth was speaking this week to the New York Times about what life has been like for him during lockdown and the inspiration behind his frog-themed illustrations which the singer has been sharing on Instagram.

During the conversation, Roth was asked if he thought Van Halen – who haven’t played live since 2015 – would ever tour again.

Roth replied: “I don’t know that Eddie Van Halen is ever really going to rally for the rigours of the road again. I don’t even want to say I’ve waited… I’ve supported for five years.

“Because what I do is physical as well as musical and spiritual – you can’t take five years off from the ring. But I did. And I do not regret a second of it.”

Roth reported back in January that Eddie Van Halen was “not doing well” – a comment which came after much speculation surrounding Eddie’s health, with some online reports suggesting he had undergone treatment for throat cancer.

Now Roth adds: “He’s a band mate. We had a colleague down and he’s down now for enough time that I don’t know that he’s going to be coming back out on the road.”

In October last year, Roth caused a stir when he said he thought Van Halen were “finished” with the vocalist adding: “Van Halen isn’t going to be coming back in the fashion that you know. That being said, Eddie Van Halen’s got his own story to tell – it’s not mine to tell.”