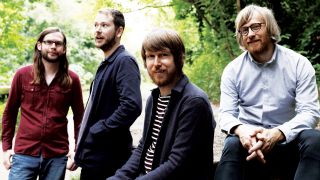 Folky proggers Wolf People have announced that they're going on indefinite hiatus. In a statement on their Facebook page the band cite "the geographical distance between us and increased personal and family commitments" as the main reason behind the move.

The band have announced a one-off show at London's Oslo venue for Sunday April 12. Tickets for the gig are available here.

Wolf People formed in Bedford in 2005, initially as a hip hop outfit, until founder members Jack Sharp (guitar) and Tom Watt (drummer) listened to Pentangle's self-titled debut album. They were the first British band signed to the US label Jagjaguwar, for whom they released three studio album, Steeple (2010), Fain (2013) and Ruins (2016), as well as the collection of EP and single tracks Tidings (2010). They were nominated for a Progressive Music Award in 2013.

The full statement from the band reads:

"Some good news and some other news...

The good news is we will be playing a headline London show on 12th April at Oslo. More details below.

The other news is that this show will be our last for the foreseeable future.

We were in the process of creating another record, and were still hugely enjoying playing and hanging out together, but with the geographical distance between us and increased personal and family commitments, we can’t make it work well enough at the moment to do the band and our audience justice, so we’ve taken the decision to put things on hold for the time being.

Please come along to the show if you are able and help us make it a celebration and an appropriate sign off, we’re really looking forward to it. We’re glad to say that after 13 years, we can move on without animosity, and we’re very proud of everything we have created and achieved.

None of us have stopped creating music by the way, so there will be much more Wolf People related output to enjoy in the near future.

Lastly, thank you to everyone who came to see us, bought our records, or engaged with our music in any way over the years. Our longevity is down to the fact that you believed in what we were doing, and that love and encouragement won’t be forgotten.