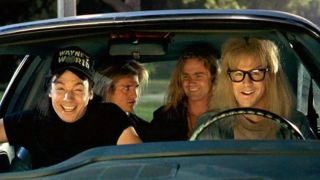 Wayne, Garth and pals in the Mirth Mobile

Garth Algar’s car from hit 1992 movie Wayne’s World is up for auction in Las Vegas.

The blue 1976 AMC Pacer is on offer with no reserve at Barrett-Jackson in Sin City, with the auction beginning today (October 13) and running through until October 15 (Saturday). It comes complete with the famous red liquorice dispenser.

Lot 608 is described in the listing as “the original 1976 AMC Pacer used in the iconic film Wayne’s World.” A gallery of pictures of the car can be viewed below.

The listing continues: “Modifications made for the film included baby blue paint over the original yellow exterior and brown interior, tow hooks welded to the front subframe, a hole was drilled in the roof for the famous liquorice dispenser, flame decals were added, and components were removed from the inner dash to accommodate the cup dispenser and a door mechanism above the sealed-off glove box.

“The studio also went with a purposely mismatched wheel combination of chrome spoked wheels in the rear and factory hubcaps in the front. Every effort was made in the car’s extensive restoration to bring it back to its movie condition.”

The car – known as the Mirth Mobile – was the scene of one of the most famous movie moments in rock history, as Algar, played by Dana Carvey, and Wayne Campbell, played by Mike Myers, headbang with friends to Queen’s Bohemian Rhapsody.

The listing adds: “The only part of the restoration not true to the movie are the upgraded speakers and stereo (the 10” restoration speakers are not functional as there never was an amp in the car).

“All the props inside the car are original.”

Bids can be made online.