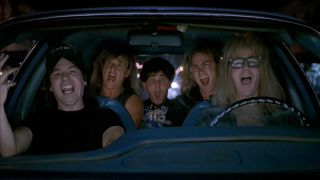 Queen guitarist Brian May has recalled how Freddie Mercury approved the iconic Bohemian Rhapsody scene in Wayne's World – just weeks before his death.

The comedy film starring Mike Myers and Dana Carvey was released in February 1992, three months after Mercury passed away.

May tells Sunday Night on 7: “Mike Myers actually sent a tape across, because he wanted Freddie to hear it. Freddie wasn’t very well by that time.

“I took it round and he listened to it and watched it – and he loved it. So Mike got the seal of approval from Freddie.”

Myers was horrified when movie bosses rushed out a re-released of Bohemian Rhapsody with clips from Wayne’s World added to the original video. He compared the act to “taking a whizz on a Picasso” and sent a note of apology to the band. But they replied: “Thank you for using our music.”

Meanwhile, May has been confirmed as winner of this year’s Observer Ethical Award for Campaigner Of The Year as a result of his opposition to the UK’s badger cull scheme.

The award aims to recognise “the public figure who has made the biggest difference to Observer readers and put ethical issues on the global agenda.”

Accepting the honour last night, May said: “It means a lot to me personally – but it also means an incredible amount to the cause we fight for: giving animals a voice.”

May and bandmate Roger Taylor are working once again with pop singer Adam Lambert, playing a run shows across the US starting next week.