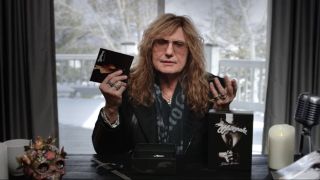 Whitesnake vocalist David Coverdale has shared an unboxing video of the upcoming Slide It In deluxe reissue.

The new edition of the band’s 1984 album will be released on March 8 via Rhino/Parlophone and features alternative mixes, music videos and previously unreleased live and studio cuts.

It also contains both the UK and US versions of the record and a brand new 35th anniversary remix.

Coverdale says of the new remix: “It’s fascinating for me on an emotional level because, as most of you know, 50% of this band passed away.

“It was just such joy to listen to their work from the 24-track transfers, just to hear Jon Lord’s solo, or Mel Galley singing, or Cozy Powell’s thunderous, Panzer Division attack force on the drums. It really is terrific. It’s very fresh, it’s very now.”

Along with the box set, Slide It In will also be released on CD, 2CD, 2LP and on digital and streaming platforms.

Earlier this month, Whitesnake released a video for their new single Shut Up & Kiss Me, which will feature on the band’s upcoming album Flesh & Blood.

It’ll launch on May 10 via Frontiers Music srl, while Whitesnake will head out on the road in April.

Whitesnake: Slide It In reissue
Whitesnake's classic 1984 album Slide It In is to be reissued as a deluxe edition featuring remastered tracks, previously unreleased live cuts, music videos and demos. View Deal

Whitesnake: Flesh & Blood
Whitesnake are back with their brand new studio album Flesh & Blood. The record features 13 tracks including Shut Up & Kiss Me, while the deluxe edition comes with five bonus songs.View Deal