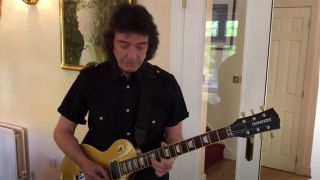 Steve Hackett has been entertaining fans during lockdown with a variety of videos, some featuring him playing acoustic guitar, some with him talking fans through a selection of Genesis and his own solo material. Now he's released a video of him playing the guitar solo from the Genesis song Firth Of Fifth.

Originally featured on Genesis' 1973 album Selling England By The Pound, the guitar solo from Firth Of Fifth has long been hailed as "the crowning glory of Hackett's time with the band" by Genesis biographers Dave Bowler and Bryan Dray, while Hackett himself has said "it'll always be twinned with me, and I still enjoy playing it. It's a great melody for guitar".

The new version of the solo has been recorded at Hackett's home during lockdown. "Here’s my latest video, playing electric guitar to a Hackett band live version of the Firth Of Fifth solo... Stay safe and enjoy!" says Hackett. You can watch the new video below.