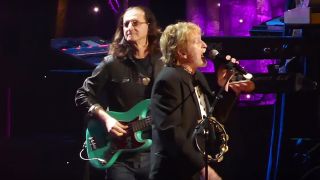 Rush bassist Geddy Lee has called it “an honour” to perform with Yes at their Rock And Roll Hall Of Fame induction ceremony.

And following the performance, Lee praised Squire for his “sheer brilliance.”

When asked what it was like learning the track, Lee told a press conference: “At first, difficult. After a while, difficult. They’re a very precise band. Chris Squire was one of the most inventive-sounding bass players ever.

“So to play his parts… I mean, it’s one thing to mimic his parts – you can mimic anything if you practice it – but to write those parts is sheer brilliance.

“It was a great honour for me to step in.”

Following Roundabout, Lee left the stage and Yes continued with Owner Of A Lonely Heart.

ELO were inducted by George Harrison’s son Dhani, with the band’s leader Jeff Lynne saying: “It’s such a pleasure to get one of these, because I’ve watched lots and lots and lots, hundreds, of people getting awards. It’s like my dad said – everything comes to him who waits.”

Pearl Jam invited their former drummers Matt Chamberlin, Dave Abbruzzese and Jack Irons to the ceremony, with the band inducted by David Letterman.

They performed Alive, Given To Fly, Better Man and wrapped up with Rockin’ In The Free World, with the band joined by Geddy Lee, Alex Lifeson, Neal Schon, Trevor Rabin, Jonathan Cain and Dhani Harrison. Irons share the drum kit with Matt Cameron for the track.