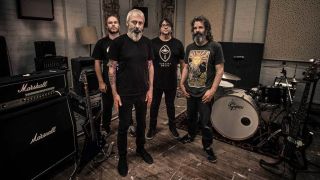 Most famous for the Flying Nun label and Dunedin’s end-of-the-world indie scene of the early ‘80s and beyond, New Zealand music always had a more metallic side if you knew where to look. It started back in 1968 when Human Condition hooked up with the great Billy TK, the “Hendrix of the Pacific”, and went on to release Stoned Guitar, a genuine classic of blazing psychedelia. For a while things bubbled away in the underground, with 1983’s Godzone Metal EP – featuring tracks from Rose Bayonet, Harlot, Tyrant and Astorath – a reaction to the UK’s NWOBHM revival and a rare visible spike in the scene.

Then, in the 1990s, came Shihad. Originally influenced by Bay Area thrash, the band softened their sound enormously as their popularity grew, but that first blast kicked down the door for those who followed. Here are ten of the best.

“Obey The Riff” has been Beastwars’ motto ever since they burst out of the Windy City scene in 2007. Now three albums into a career of savagely post-apocalyptic sludge metal, the intervening years have seen the band get slower, heavier, and ever more ominous. They’ve even released their own beer, adorned by a label that features an alligator fighting a lion. Proceed with caution.

In July 2014 Devilskin’s We Rise entered the New Zealand album chart at number one, knocking mawkish pop minstrel Ed Sheeran off the number one spot. This alone would be cause for celebration, but We Rise is also a high quality collection of dynamic alt-metal belters with vast, sing-along choruses. Frontwoman Jennie Skulander has a voice that ricochets from air raid siren to satanic growl with nary a missed beat, and album number two (due November 11) promises to deliver more.

A band with a sound so brutal it’s rumoured they record their albums in Beelzebub’s actual festering bowels, Ulcerate’s unorthodox take on death metal finds towering walls of guitars do battle with blastbeat drums and a vocal that sounds like a thousand angry demons rising up from the earth to confront wretched humanity. Unique, oppressive, and sonically devastating.

Named after the Christian-bashing Roman emperor Diocletian, this Auckland war metal outfit split up in 2015 after a decade in the trenches and three churning, nightmarish albums. 2013’s crushing Gesundrian is the band’s best work, but a new line-up is rumoured, so watch this space.

Legendary in Kiwi metal circles, the ever-aggressive 8 Foot Sativa have had more line-up changes than the average boys choir since launching in West Auckland in 2008, but it hasn’t stopped them becoming NZ’s most famous death metal act. Second album Season For Assault captures the band at their ferocious best.

It’s taken Set On End a decade to release their full-length debut, but The Dark Beyond is a dazzling collection of cacophonous djent riffs and rhythms. Think somewhere between Architects and Trivium, with an unexpected touch of Deftones thrown into the mix. They’re signed to Artery in the US, which is a big deal indeed for a NZ band.

Most famous back home for the media outrage that ensued when singer Rigel Walshe was revealed to be a respected member of the New Zealand police force, technical death metal’s very own Dawn Of Azazel are masters of frenzied, sustained turmoil. After splitting up in 2007, they returned with 2013’s merciless album The Tides Of Damocles.

Led by fleet-fingered virtuoso Richie Allan, the all-instrumental Heavy Metal Ninjas are a serious proposition despite the rather silly name. A fan of shredders like Yngwie Malmsteen and Steve Vai, Allan has drilled his masked gang of stunt guitarists to the point where they might just be the greatest showmen in the entire Land Of The Long White Cloud.

The release of 1993’s highly influential Opus One demo paved the way for other extreme metal acts to follow, yet it took 20 years for Christchurch’s terrifying Sinistrous Diabolus to release their full-length follow-up, the utterly Satanic Total Doom Desecration. A couple of years ago guitarist/mainman Kris Stanley had his thumb ripped off while working in a bronze foundry, which might just be the most metal workplace injury ever sustained by any musician.

One for the future: Alien Weaponry aren’t old enough to drink – hell, they’re barely into their teens – but they’ve already achieved national recognition. Old-school thrashers from the tiny Northland town of Waipu, they received a $10,000 grant in 2015 from NZ On Air to help cover recording costs, and collected another $33,000 last month at the Smokefree Rockquest and Pacifica Beats contests. Not bad pocket money for a trio that includes two 14-year-olds.

10 of the best metal bands from France