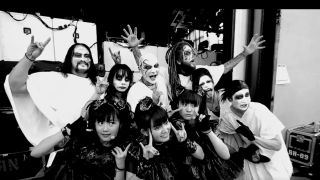 Korn's Brian \u2018Head\u2019 Welch with Babymetal and their band

The video was posted on Korn’s Twitter feed and shows the guitarist having ghostly makeup applied before he hits the stage with the Japanese trio and their band.

Babymetal joined Korn on their Serenity Of Summer North American tour which wrapped up earlier this month in Cleveland. Other bands on the bill were Stone Sour, Skillet, Yelawolf, Islander and Ded.

Korn were playing in support of their 12th studio album The Serenity Of Suffering, while Babymetal were promoting their second record Metal Resistance which arrived in March 2016.

Asked in a new interview with TeamRock if Korn had any special plans to mark their 25th anniversary next year, guitarist James ‘Munky’ Shaffer says: “We want to do something truly special for our fans to show how much we appreciate the way they’ve stuck with us.

“We want something they’ll be proud to show their children. Right now that’s all I can say.”

Korn are currently on tour across Europe and will return to the US and Mexico for further dates later this year. Find a full list of tour dates below.

Korn give us the lowdown ahead of their UK dates