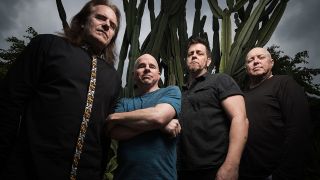 Spock’s Beard spin-off Pattern-Seeking Animals have released a new video showing drummer Jimmy Keegan playing through their track These Are My Things.

The song features on the group’s self-titled debut album which launched earlier this month through InsideOut Music.

The video shows Keegan behind the kit in the studio and is interspersed with lyrics and stills from the record’s packaging.

The project was originally intended as a vehicle for tracks Boegehold had been working on since early last year, but with enough material to record a full album, he enlisted the help of the trio to complete the record.

Boegehold explained: “My goal was to produce music that’s progressive and intricate while keeping things immediate and melodic. Whether a song is four minutes or 10-minutes long, I didn’t want more than a few bars go by without some kind of instrumental or vocal hook.”