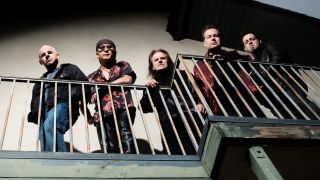 In a parallel universe, this story might have been titled ‘live long and prosper’. As an almost ever-present member of the Californian group, which was named on a whim in honour of the late Leonard Nimoy’s Star Trek character, Dave Meros approves of this idea. Certainly, with a storied 23-year lineage and 12 studio albums to their name, the ‘live long’ part couldn’t be more accurate. “Thinking about that makes me feel tired,” chuckles the bass player. “I was a young man when we started.”

And in their own way, Spock’s Beard have prospered. Though they never quite made the transition from clubs to theatres, any act that rides out the turbulence of the music business for almost a quarter of a century can quite rightly consider itself successful.

To all of us on the outside, the departure in 2002 of co-founder, chief songwriter and mentor Neal Morse threatened the group’s very existence, though a line-up reshuffle that promoted drummer Nick D’Virgilio to frontman saw them not only weather this storm but flourish, resulting in the creation of some of their finest music.

A repeat blow was to follow. D’Virgilio’s own exit in 2011 appeared only marginally less catastrophic. Yet again, however, Spock’s proved their mettle, hiring Enchant’s Ted Leonard and making live drummer Jimmy Keegan a permanent fixture for the 2013 album Brief Nocturnes And Dreamless Sleep.

Now, after a well-received world tour that saw them visit the UK twice, the band are back with The Oblivion Particle. Circa his introduction, Leonard joked to Prog about not wanting to be the Spock’s Beard equivalent of Gary Cherone – Van Halen’s unloved mid-period frontman – and, luckily, his worst fears were not confirmed. “Those fans that haven’t accepted me were at least kind enough to keep it to themselves,” the singer grins. “But seriously, there was much less resistance than I had expected.”

WE’RE PROUD TO HAVE PLAYED A PART IN THIS MUSIC’S REVIVAL, AND I BELIEVE WE HAVE SECURED OUR PLACE IN ITS HISTORY.

The group carried this sense of positivity with them into the studio and with Rich Mouser once again behind the desk, The Oblivion Particle was made in largely the same way as its predecessor. However, perhaps surprisingly, Meros reveals that unlike last time, which saw everybody bar Keegan and keysman Ryo Okumoto chipping in, the bassist opted out of the compositional process.

“I’ve no ego about having a song on every record. With the music industry in its current state…” He pauses to choose his words. “A lot of different factors affected [my absence from the credits]. I just wasn’t feeling it any more. I don’t have all these things inside of me that need to get out in the way Neal [Morse] does, but of course I still like to play.”

In their press biography, Meros claims that with the exception of its opening song, Tides Of Time, The Oblivion Particle offers some “fairly different” twists to the band’s long-established formula.

“The music is maybe a little more… thoughtful? More on the artistic side and with less bombast,” he ponders when asked to elaborate. “But being bombastic is such fun, we’ll never get away from that.”

“To me, the album has a Genesis vibe to it, but from a different era of Genesis than people are accustomed to hearing from Spock’s,” Leonard adds. “At the same time, it’s not really a massive departure.”

The record’s nine songs are not fully linked in a conceptual sense, though Meros explains that in confirming its title, they realised a common theme of invention. One of several such selections, Bennett Built A Time Machine, the gloriously technicolour yet fictional tale of a scientist who journeys into the past to right the wrongs of his life, is a defining moment. It also sees Leonard lending Keegan the mic. “And why would I not?” Leonard quips when asked about relinquishing the role. “The Beatles let Ringo sing, and Jimmy’s a bit better than Ringo.”

Prog wonders what Meros and Leonard would do with such a time-travelling device? “Oh, I’d be tempted to go back and change some major stuff in my life, but that’s kind of what the song’s about,” responds Meros. “In doing so that could ruin everything else. You never know.”

“At the very least I’d go back to the day before I was told Enchant were going to get to open for Dream Theater and I wouldn’t have cut my hair!” Leonard laughs.

Although Neal Morse co-wrote two songs on the last album and added guitar to one of its tracks, this time he didn’t participate at all. His name crops up during the conversation, though, and from a fan’s perspective, following his guest appearance with the band at 2011’s High Voltage Festival, talk of a permanent return is never far away.

“Neal started this band and was its sole songwriter for half of our catalogue so that doesn’t annoy me,” says Meros. “He’s gone but those questions will be asked forever. Until recently I kind of wondered about it myself, but now… we’ve both gone down our own paths for so long, I can pretty much guarantee that it won’t happen.”

Meros half-jokingly likens his band to prog’s version of a cockroach. “They just can’t kill us!” he guffaws. “Our fans gave us a pass with the Nick era – they didn’t start getting critical until that line-up’s second album. To me, Feel Euphoria [released in 2003 and their first without Neal] wasn’t a very strong record, but people were so happy to see us continue that they gave us the benefit of the doubt.”

While Spock’s Beard have yet to follow suit, Neal Morse’s all-star project Transatlantic has proven that it is possible for a prog act to make the step up into bigger halls. “Transatlantic are a phenomenon – I’ve tried to figure out how they did that,” Meros states. “The only explanation is that they’re a superstar band. That first album of theirs made me thoroughly depressed because it was really, really good and Neal was still with Spock’s Beard at the time. I expected it to take off like a rocket and for Neal to leave us in the dust, but it didn’t.

“Then Neal quit them at the same time he quit Spock’s and eight or nine years later, Transatlantic came out of hiatus and they exploded,” he marvels. “I’ve no idea why it happened second time around. Neal’s solo concerts don’t draw like Transatlantic does.”

“We’d love Spock’s to repeat that success,” adds Leonard, who took on the auxiliary role previously occupied by Pain Of Salvation’s Daniel Gildenlöw for Transatlantic’s last tour, though he adds with a wink: “But maybe we’d have to hire some members of more well‑known bands to make that happen.”

THE BEATLES LET RINGO SING, AND JIMMY’S A BIT BETTER THAN RINGO.

Meros suspects that plenty of raw talent exists on the scene but is honest enough to reveal that Synaesthesia, a young British act, and Providence from Hungary, were both selected as support acts for an autumn tour of Europe as much for their ability to contribute to its overheads as for their musical ability. “We really like both bands, but without assistance towards paying for the bus, we probably couldn’t afford even to do a tour,” he admits.

As an act to have flown the tattered banner during prog’s nadir, Spock’s Beard derive satisfaction from the genre’s revitalisation, though it’s a slightly bittersweet feeling. “I hear about bands playing the darker, harder-edged type of prog that’s really popular right now and sometimes I wish we were doing that too,” Meros says. “But we’re proud to have played a part in this music’s revival, and I believe we have secured our place in its history. And there are no plans to go away any time soon.”

As Nimoy himself might have said, doing so would simply be illogical.

The Oblivion Particle is out on August 21 via InsideOut. For details, see www.spocksbeard.com.

John Boegehold (below) and Stan Ausmus (right) are the mystery men of Spock’s Beard, contributing multiple songs to each of the band’s albums from the point when Neal Morse vacated the creative tiller. As well as being a co-producer of The Oblivion Particle, Boegehold supplied five of its songs, while Ausmus authored the lead-off track, Tides Of Time. The relationship with Boegehold goes back to Meros’ pre-Spock’s days.

“John and I were in bands together in the late 1980s and early 1990s, and we tried to get hits by writing songs that sounded like Madonna or Duran Duran,” explains Meros. “John has been involved from the very beginning of Spock’s Beard – taking photos, designing album covers and working on our websites – but he has no desire for the daily grind of being in a band. He’s probably pretty smart.”

Stan Ausmus, another long-standing friend of the group, fulfils a back‑room role that also shouldn’t be underestimated.

“Before each album, Stan casually tells us: ‘I’m working on something’ – and then he delivers this immaculate song on a silver platter,” Meros laughs. “Stan should write far more than he does, but he always supplies us with a gem.”