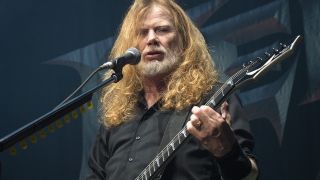 Footage of the performance from the city’s Zenith has now emerged and can be watched below, with the band later thanking fans with a video montage which also included Electra’s appearance.

The occasion also marked Electra’s 22nd birthday – and she posted on Twitter: “Biggest and best birthday ever.”

Later, she shared a short clip from the show, saying: “Didn’t realise there were 6000 of you out there... jeez! Lol.”

Megadeth are on the road with Five Finger Death Punch with the tour kicking off in Finland earlier this month. The tour is Megadeth’s first since Mustaine completed treatment for throat cancer last year.

After the first concert, Megadeth bassist David Ellefson posted a message on social media with a picture form their set, saying: “This is a photo from tonight's tour kick off show in Helsinki – one filled with overwhelming gratitude from the four of us for the return of Dave's health, and the privilege for us to perform for you again.

“The reality and weight of what hung in the balance during Dave's cancer treatments these last months really shone through during the Q&A at the pre-show VIP meet n greet and in each song we performed on that stage.

“Life is a gift and our health is precious. Thank you for all the prayers and support to Dave and the Megadeth camp these past months... hey surely worked!

“We are blessed to celebrate this new decade on a sold out tour across Europe! Hope to see you there. Godspeed."

The next stop on the tour which also features Bad Wolves will take place tonight (January 30) in Cardiff.