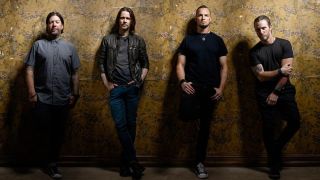 Alter Bridge have released a lyric video for their new single Godspeed.

It’s the latest material taken from their sixth studio album Walk The Sky, which launched in October last year through Napalm Records.

The promo features live footage of Alter Bridge, with a statement on the release saying: “As a new decade gets underway and new year’s resolutions are made and broken, Alter Bridge are back with a new single and video for the song Godspeed.

“The song has become a fast favourite among fans and critics alike. Written in memory of a friend of the band who passed away, Godspeed is an uplifting musical memorial for anyone who has lost someone.”

The video comes as Alter Bridge prepare to hit the road across the US, with the tour getting under way in Lake Charles on January 31 and wrapping up in Spokane on February 27.

Earlier today, its was confirmed that Alter Bridge would be plating at this year’s Rocklahoma, which takes place at Pryor Creek Music Festival Grounds in Pryor, Oklahoma – just outside Tulsa – on May 22-24.

Alter Bridge: Walk The Sky
Alter Bridge released their new studio album Walk The Sky in October 2019. It'll features the singles Wouldn't You Rather, Pay No Mind, Take The Crown, In The Deep and Godspeed.View Deal