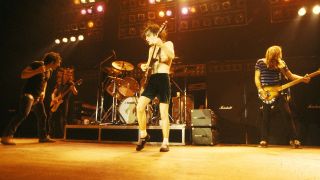 Earlier this week, AC/DC’s social media channels flickered back to life as the band announced they would be celebrating the 40th anniversary of their landmark album Back In Black.

AC/DC uploaded a short Hells Bells video, a picture of a promotial billboard advertising Brian Johnson's North American debut with the band, and followed that with rare documentary footage of them discussing how they created You Shook Me All Night Long.

Now, AC/DC have shared a video of them performing What Do You Do For Money Honey live in Tokyo from 1981, with further videos and promotional material expected from the rock giants throughout the remainder of July.

AC/DC have also launched a fanwall, and have asked fans to post photos and videos on Instagram using the hashtag #backinblack40. The band are hand-picking their favourites and already, the page is filling up with AC/DC fans of all ages.

Last month, drummer Chris Slade reported he would be “ready to go” if he got the call to rejoin AC/DC, although it’s rumoured that Phil Rudd is back in the lineup alongside Brian Johnson.