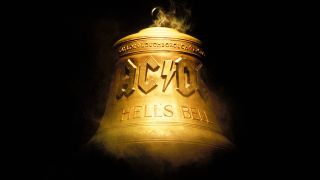 AC/DC have shared their second video from the archives as they continue to celebrate the 40th anniversary of their landmark Back In Black album.

Last week, the band released a video showing them discussing how they made You Shook Me All Night Long and followed that with a raucous performance from Tokyo of What Do You Do For Money Honey in 1981.

The latest clip from the vault sees Brian Johnson, Angus Young and Malcolm Young talking about legendary album opener Hells Bells and how it all came together at Compass Point Studios in the Bahamas in the spring of 1980 with producer Mutt Lange.

AC/DC's Facebook page describe the video as being about "the bell and the riff heard 'round the world," with Johnson talking about the opening lyrics, while Angus and Malcolm play the famous intro.

Malcolm adds: “It was a really good intro – it was really ominous. Angus had the title Hells Bells – and I was just taking a piss and I just thought: ‘Hang on, why don’t we get a big fucking bell!’"

As part of the Back In Black anniversary celebrations, AC/DC also launched a fanwall, and are asking fans to post photos and videos on Instagram using the hashtag #backinblack40 which will then appear on the website.

In June, drummer Chris Slade reported he would be “ready to go” if he got the call to rejoin AC/DC, although it’s rumoured that Phil Rudd is back in the lineup alongside Brian Johnson.