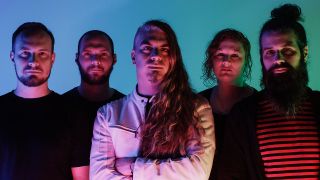 Australian prog rockers Voyager have announced the reissue of their 2017 album Ghost Mile. The album will be reissued by Season of Mist on July 10. The album will be released on vinyl for the very first time, and the CD digipak reissue will feature three extra tracks which were recorded during Voyager's appearance at ProgPower in 2017. You can watch he live video for the album title track below.

"What a Wonderful Day," say the band. "Whilst we're all feeling a bit Disconnected, why don't we take a walk down To The Riverside and take in the Fragile Serene? This will prepare ourselves for the limited edition vinyl pressing of Ghost Mile, which goes on sale this Wednesday! This Gentle Earth is recovering from a huge ordeal, and  we want to extend a Lifeline during this time. Misery is Only Company, and soon the darkness will give way to Ascension playing through your speakers on July 10th. So As The City Takes The Night on May 27th, head to our Bandcamp or to Season of Mist’s online store to claim your copy."

Voyager previously announced the rescheduled dates for their Australian headline tour, which will now happen in February 2021. The full list of newly confirmed dates can be found below.

"You know what helps build something more than waiting? Waiting some more," says singer Danny Estrin. "So just as we were super excited to tour Colours In The Sun around Australia in May 2020, we are going to be at least twice as excited to bring it to you in 2021. We are going to be raring to burn off those isolation pounds on stage and bring you a smorgasbord of pent up Voyagerisms; more than ever, live music will have a whole new meaning and I can't wait to see everyone's smiles, some new 80s hairdos and some inflatable keytars - Runaway until 2021 Australia, see you soon(ish)."