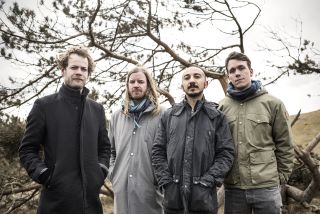 We Are Thin Air
Nicolai: This song has more of a ‘wall of sound’ feel to it than our old album Inmazes. With the intro riff being more chord based rather than based on single notes. The chorus is dreamy and its melody is showing that we’re influenced by the Danish band Mew. It’s also one of the songs that has the most odd time-signatures on this album.
Asger: The lyrics are about a couple who experiences a growing divide between them. They try to maintain and portray a flawless image to the outside world, but this is only a fragile facade of something that is slowly deteriorating on the inside.

Ghosts
Nicolai: We had an older song demo where we really liked the chorus idea and decided to write a new song around that chorus. It has a different vibe than most other songs we’ve done, it’s definitely softer sounding, but it’s more challenging to play than one might think.
Asger: The theme of this song is fear of death and the strategies we use in attempts to undermine this fear and the depression that can follow if facts about death effectively grow roots in our minds.

Ruby Pool
Adam: It’s a very engaging yet mellow song. It has a dreamy vibe to it with soft sounds, but with a very unique groove behind it. The song drifts away all on its own and its chorus would fit right in the 80’s.
Asger: Lyrically this song is about how excessive use of communication through social media by a group of young people creates a void of aching desire to try to be close to each other physically.

Smartfriend
Asger: Smartfriend is about trying to be on the forefront of society by surgically altering your body with digital tools that makes you a more valuable part of the labor force. Problems arise when these electronic installations begin to work against the will of their host.
Adam: This is definitely one of the more aggressive songs that we’ve ever done. It has plenty of heavy and technical riffs and grooves, aiming to reinforce the idea of technology gone wrong in a malicious way. Craig Murray did an amazing video for the song, he really managed to capture the lyrical theme of the song and turn it into something visual but with his own twisted spin.

Vertigo
Nicolai: This is a quiet and massive song all at the same time. Situated in the middle of the album, it serves as a hopefully nice break for the ears. The song is built around an icy keyboard loop with plenty of choir parts on top.
Asger: The lyrics for this song deal with the psychological aftermath of a breakup.

Alien Shivers
Nicolai: This song is based on a riff that I wrote a while back. It’s the first song we wrote for the album and its riffs and melodies serve as a nice bridge between the new album and the old. I made a stop motion music video for it with my girlfriend using puppets made of paper, dried flowers and even ground coffee beans.
Asger: This song is about a friendship that is shattered because of a planned and executed terrorist attack by one of its parties. It's mainly viewed from perspective of the surviving individual who tries to make sense of what went wrong in the period leading up to the attack.

Still
Adam: Still is a song that has an intense energy throughout the whole song. It is straightforward in its structure and feel, but it has rhythms that are a bit odd which gives the song a bit more of an edge.
Asger: This song is about letting your whereabouts in the city be controlled by the fear of terrorist attacks.

Applause Of A Distant Crowd
Adam: This song is the most dynamic song on the album. It has parts that are mellow and calm that then transition into other sections that have a lot of intensity and energy where every instrument is being busy.
Asger: The lyrics are about a person who tries to find solace and support in social media after a breakup. It becomes a battle between the easily obtained distractions of the internet and the haunting memory of the person who no longer lives in the apartment.