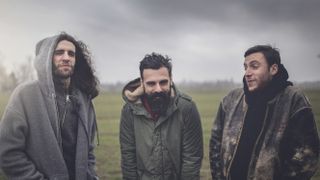 Valerian Swing have released a stream of their new track Four Horses exclusively with Prog.

It’ll feature on the Italian outfit’s upcoming album Nights, which will launch on May 12 via Small Pond and To Lose La Track in Italy.

Speaking about the track, vocalist Stefano Villani tells Prog: “It was the first piece composed after AURORA. No voices, rhythmic twists killer, and the most rousing refrain that we’ve ever done. Hearing is believing.”

Villani is joined in the lineup by drummer David Ferretti and baritone guitarist Francesco Giovanetti, with their fourth album described as showcasing Valerian Swing’s “sublime technique and speed.”

A statement continues: “Unlike previous albums the aim was to focus more on the melodic construction of their songs and less on the extreme. The result is an an album that explores more expansive post-rock, rhythmic and cinematic sounds.”

The band will play four dates across England in April with Alpha Male Tea Party. Further Nights details will be revealed in due course.