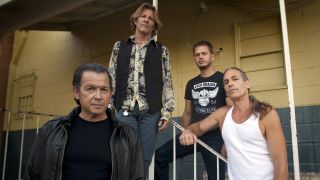 Tommy Castro and the Painkillers will release second album Method To My Madness on October 23, the mainman has confirmed.

And he describes the follow-up to 2014’s The Devil You Know as a return to his “basic ingredients” of blues and soul, while still presenting something different from his past works.

Six-time Blues Music Awards winner Castro says: “I’ve always been a blues guy – it’s what I’m meant to do. But I’m always listening and reacting to what’s going on in the outside world, experimenting with my guitar tone and my songwriting to keep my music fresh.

“With the new album I went for the energy of connecting with my band. We kept everything raw, capturing the feeling of playing live.”

Castro and the Painkillers launch a North American tour following the launch of Method To My Madness via Alligator.