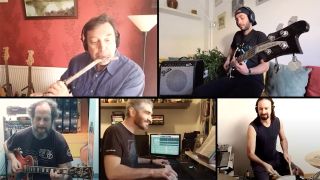 Italian prog rockers The Watch have teamed up with John Hackett for a new lockdown video covering the Genesis song Can-Utility And The Coastliners. Originally included on the band's 1972 Foxtrot album, the song was largely written by John's bother Steve, and is based around the legend of King Canute.

"In these dark period we thought that performing at distance, each one quarantined at his own place, was the best we could do to somehow play together and still feel united," The Watch bass player Mattia Rossetti tells Prog. "We also got in touch with our long time friend John Hackett who has been delighted to join us in this. What we miss in fact is not only being on stage together but also meeting all our friends all over Europe and UK while touring.

"After such a great response to our quarantine videos we can really tell that music can surely shorten distances and help not to feel completely alone in such difficult times. We decided to play Can-Utility And The Coastliners, even when we couldn't use all our musical instruments as they were stuck in our rehearsing room, like the Mellotron or the Hammond organ.

"It is a song really full of emotions we absolutely are in love with and that we've been often performing during our The Watch plays Genesis live shows.”