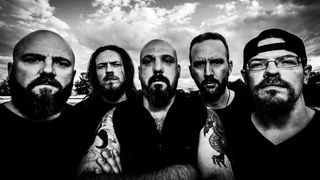 The King Is Blind recorded the Eagles Of Death Metal hit in tribute to their friend Nick Alexander, who was killed during the terror attacks on The Bataclan in Paris last year.

“Colchester is a small town, with a close-knit music scene,” says The King Is Blind guitarist Lee Appleton. “Nick Alexander was someone we knew from the pubs and gigs in our home town for many years and we felt tremendous shock and sadness when we heard about his death, along with so many others in the Paris attacks in November 2015.”

Following the attacks, Eagles Of Death Metal announced the Play It Forward campaign, for which artists would record a cover of I Love You All The Time with all publishing royalties and proceeds going to The Sweet Stuff Foundation to aid those affected.

“Tom Donovan is a producer and owns Tom Donovan Studios in Essex where The King Is Blind recorded their demos, The Deficiencies Of Man EP and full-length debut Our Father,” says Lee. “Tom took the concept that EODM had presented, and took it to the extreme by offering free studio time to bands wishing to record their version of the song. Jumping head-first into the project to record as many covers of the EODM track as humanly possible, he asked if TKIB were interested in getting involved. I’ve known Tom for nearly 20 years so I know what he’s like when he’s fired up about an idea, so I said yes on behalf of the band before I’d even heard the EODM song.

“As soon as I got off the phone to Tom, I looked up the original EODM track online and the fear kicked in – the song was a jaunty little ditty without a hint of metal, let alone TKIB’s ‘monolithic’ metal. It became pretty clear that instead of doing a straightforward cover of the song, we would need to tear up the original and use only the blueprint from the music tablature to design a track, guided by our feelings surrounding Nick and Paris, akin to something that Type O Negative would do when approaching their various re-interpretations. With the path now clear, we began to focus on delivering a much more sombre, emotional tone to the track.”

” Mark is an enormous talent, one of the best out there, with a vast musical knowledge so I knew I could give him an embryonic plan and he would easily understand it and be able to assemble some Viennese musicians to get the job done,” says Lee.

“At certain points, we felt overwhelmed with emotion during the process, but with the help of Tom, Mark and his colleagues in Vienna we have been able to come up with a track expressing our compassion and grief which, we hope, will be a fitting tribute to Nick and all who were directly affected by the Paris attacks.”

I Love You All The Time is available to buy now from iTunes. The King Is Blind will play the Sunday of Download festival.