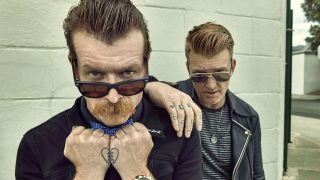 Eagles Of Death Metal have thanked artists for answering their call to cover their track I Love You All The Time for charity.

Mainman Josh Homme asked fellow musicians to record the song to help raise cash for victims of the Bataclan terror attacks which left 89 people dead at the band’s gig in Paris on November 13.

The first batch of tracks have now been released under the Play It Forward Campaign banner, with all publishing royalties and proceeds going to The Sweet Stuff Foundation to aid those affected.

Homme says in a statement: “I made a plea to artists and business people alike to come together to use our solidarity as proof that we are stronger together, and that we can make a difference.

“We are proud to be a little part of such a big group of talent and good will. We can’t thank these artists enough for their donations of talent, love, time and compassion.

“Now, the Play It Forward Campaign is in the hands of the fans to help us make a difference, and to help those affected by this tragedy. Please listen, purchase, play and enjoy – and know that every time you do, you’re doing the sweet stuff that makes that difference.”

Jimmy Eat World, My Morning Jacket, Kings Of Leon, Savages and more have so far contributed. All tracks are available to buy and stream from the campaign’s website.

In addition, Pearl Jam and their drummer Matt Cameron have released two Eagles Of Death Metal covers to aid the campaign. I Want You So Hard, recorded at their recent show in Rio, along with Cameron’s version of I Love You All The Time, are available via their website.

Earlier this week, Eagles Of Death Metal rescheduled their European tour for early next year, which will see them return to Paris on February 16. They’ll also play the Reading & Leeds festivals in the UK in August.