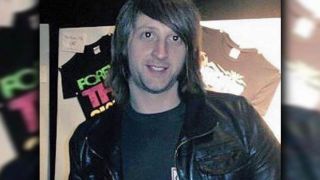 Friends of a member of Eagles Of Death Metal’s crew who was killed in Friday’s Paris terror attacks have set up a memorial fund in his name.

Nick Alexander, 36 and from Colchester, was working on the band’s merchandise desk when gunmen burst into the Bataclan venue and opened fire before detonating suicide bombs.

More than 80 people are believed to have died at the club, while in total 129 were murdered across the French capital in a series of coordinated attacks. Extremist group IS have claimed responsibility.

In a statement, Alexander’s family say: “It is with huge sorrow that we can confirm that our beloved Nick lost his life at the Bataclan last night. Nick was not just our brother, son and uncle. He was everyone’s best friend – generous, funny and fiercely loyal.

“Nick died doing the job he loved and we take great comfort in knowing how much he was cherished by his friends around the world. Thank you for your thoughts and respect for our family at this difficult time.”

A GoFundMe memorial fund set up by Alexander’s friend Miguel Benavides has so far raised $46,000.

Benavides says: “My initial goal for this find was to benefit my friend in the most direct way that was calling to me. I personally want to help his family. Two things happened – we reached a significant amount quickly, and our extended tour family pointed out a basic rule of the road, we take care of our own, even the ones we don’t personally know. Taking this to heart, we are converting this fund to taking care of more than just Nick.

“Today or tonight raise a glass to the memory of Nick Alexander a guy doing a simple job of touring with a band and selling t-shirts going new places and making new friends. Last night, he ended his journey in a small theatre in Paris along with many others who’s lives were cut short by hate, by misguided religion, by ignorance.”

EODM’s French record label Mercury confirmed one of their members of staff also died at the Bataclan. Mercury CEO Lucian Grainge says: “At this point, we have confirmed that Thomas Ayad, an international product manager for Mercury, lost his life in the attack on the theatre.

“This is an unspeakably appalling tragedy. I cannot even begin to express the depth of my sorrow.”

Today, police in Belgium have detained seven men believed to have been involved in plotting the terror attacks as the death toll rose to 129 and the number of people injured is confirmed to be 352. Of those, 99 are in a critical condition.

In the wake of the attacks, many stars form the world of rock and metal passed on their condolences to the people of France.