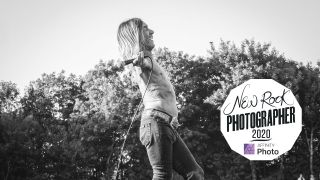 Louder has joined forces with with image editing software Affinity Photo to find the best new rock photographers of 2020. The competition runs over six months with a series of monthly challenges: Challenge 1 was on live photography and won by a shot of prog singer Damian Wilson crowd-surfing. Challenge 2 was all about Crowd & Venue Scenes and won by a great shot of a Machine Head crowd. The Shot On Mobile heat was won by this live shot of Manchester band Larkins.  And Challenge #4 on Album Photography was won by a brain-scrambling shot that could have been the cover of a new prog album.

The penultimate challenge was around black and white photography. With lockdown in place, entrants dug into their archives for shots, making it one of the toughest heats yet. But there can only be one winner…

And the winner is...

Taken by Polish-born photographer Edyta Krzesak, the judges thought the picture captured the joy of live performance and the love between performer and audience.

So what was the story behind the shot? "The picture is part of a mini-series I took some time ago at Milton Keynes Bowl when Iggy Pop was opening for Foo Fighters in 2015," says Edyta. "It was the 'Broken Leg Tour', with Dave playing from his throne. That night was really special for me. I had tickets for the originally-planned Wembley and was buzzing not only because of Foo Fighters but also because of Iggy Pop, who was scheduled to open for them.

"When Dave broke his leg I was double gutted. I was not only losing a Foos gig, but also Iggy's. I know his music is not everyone's cuppa, but it's definitely mine. When the whole tour was rescheduled with Iggy playing alongside the Foos, I felt like my dreams had come true.

"I grew up in Poland and when I was a kid, the idea of seeing Iggy play was like a trip to the moon, for a kid of the 90s whose country had just come out of communism. Back then, I never thought I would be able to see him play. And yet, there I was, maybe a bit older, carrying Nikon Coolpix L830 instead of my old Praktika L2, standing on the fields among other music lovers, witnessing a true music icon in flesh and blood.

"That day I felt like I was back a teenager listening to my dad's tapes and discovering the music. Iggy is one of those artists that build a strong bond between the stage and the crowd, erasing the borders between the performance, performer and a witness, uniting everyone by sharing the same love and passion for music. For me, this picture says it all. It's about the joy of the live music, shared on and off stage, a single moment I was fortunate to capture. It also reflects how I felt that day: careless, free and happy.

Congratulations to Edyta and thank you to everyone who entered.

Affinity Photo picture-editing software is about speed, power and precision - and so is the best rock music. This photo competition is about finding new photographers who capture the spirit of rock’n’roll and helping them to get the best from their photographs.

The competition will run over the next six months with a series of monthly challenges based around different aspects of music photography: live shots, portraits, shooting in black and white etc. The competition is free to enter and there are monthly prizes for the winners of each category. At the end of the six months, the judges will choose one overall winner who will receive:

Additionally, all entrants will be able to buy the award-winning photo editing software Affinity Photo, on PC or Mac, for less than half price - £23.99 instead of the usual £48.99.

Affinity’s John Atkin says: “Even the best photographers adjust their images before publication, and Affinity Photo is perfect whether you want to make quick corrections or complex, multi-layered edits.

“The low one-off price and no monthly subscription means it’s ideal for photographers on a budget, or who might not be using it all the time, while still delivering all of the editing capabilities the top pros require. And it’s all backed up with a whole load of free, easy-to-follow video tutorials that can help make you a better photographer.”

The final challenge is live now.