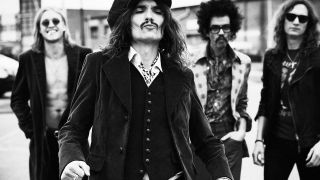 The vocalist and guitarist made the comment while speaking about the themes behind their new album Easter Is Cancelled in the new issue of Classic Rock magazine.

Hawkins explained: “Some of it’s multiverse theory and some of it’s childhood memories told as allegorical love tales. Some of it’s matters of the heart. But it’s framed by our view that our compatriots in the sphere of rock aren’t pulling their weight.

“We all agree that the really challenging musical endeavours are happening in other genres. That’s disappointing to us, so we’ve spent nine months showing people how to fucking do it properly.”

Asked whether rising rockers Greta Van Fleet could perhaps be singled out for rejuvenating the rock scene recently, Hawkins says: “The timbre of Josh Kiszka’s voice is so similar to Robert Plant’s that you can’t help but be excited when you hear him sing.

“There’s lots of potential for them to be as amazing as Led Zeppelin, but they’re going to need some better songs.

“When something like this comes along and everyone gets excited, it shows you how little we have to offer as a genre. That’s not to slag them off, because I think they have the potential to be amazing.

“They could be the next phase of what Led Zeppelin should have been doing. There’s nothing wrong with adopting classic rock choreography and clothes, but you have to kick on from there.”

The band’s thoughts on the current state of rock were laid out earlier this year when The Darkness debuted the first single from Easter Is Cancelled, Rock And Roll Deserves To Die.

Bassist Frankie Poullain said at the time: “A lot of bands have relinquished their duty. Rock'n'roll is so uniform now. Everybody dresses the same, looks the same, sounds the same. It’s pathetic. It deserves to die.”

The band will head out on tour in support of Easter Is Cancelled in the UK and Ireland from November, with further dates planned in Europe in early 2020.

The full interview with The Darkness can be found in the new issue of Classic Rock magazine which is on sale now.

Issue 268 features Queen as the cover stars and comes with a giant, double-sided Freddie Mercury poster, an extra magazine featuring the ultimate album-by-album guide to Queen's discography and a 148-page Queen eBook.

And they also have this mega-package with the album on vinyl, cassette and CD, with bonus tracks AND a signed photograph.