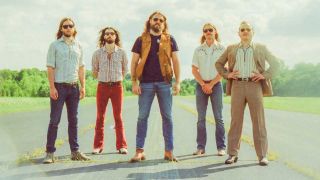 The Sheepdogs, famously, are the only unsigned band to appear on the cover of Rolling Stone. This happened back in 2011, after the Saskatoon natives triumphed over 15 other competitors to win the magazine's "Do You Wanna Be A Rock & Roll Star?" competition.

The cover was posted on a giant billboard in New York's Times Square, the band appeared on Late Night with Jimmy Fallon and signed a deal with Atlantic Records, and CBC News interviewed the drummer's mum.

This overnight success had been a while coming – the band had formed half a decade earlier – but they were a perfect choice. The Sheepdogs harked back to the magazine's glory days, when rock music straddled the globe, unencumbered by other, lesser genres, and success was measured by the strength of a band's music rather than by the size of their social media following.

They're the kind of band you could drop into a remake of Cameron Crowe's Almost Famous without having to bother the wardrobe department. The music fits. The look fits. And the songs fit.

For The Sheepdogs write songs. Proper songs. Songs that linger in the memory long after the last notes have faded. And now they're bringing those songs to Europe. Having entertained Rival Sons' crowd earlier in the year, they're back for their own headline shows, including four UK shows that culminate in a set of three performances at Kent's Black Deer Festival on June 21, 22 and 23. Tickets are on sale now (full dates below).

Those who've seen the band before will know what to expect: harmonies, intricately duelling guitars, instrument swapping, magnificent facial hair, some glorious fashion choices, and a trombone. And those who haven't seen the band before... what are you waiting for?

Below, The Sheepdogs' Ewan Currie picks the 10 Records That Changed His Life. Ewan's solo album Out Of My Mind is out now.

"Easily my favourite Allmans tune and quite possibly my favourite song all-time. Dickey Betts sings with wonderful countrified restraint as he and Duane spin a spectacular web of shimmering sky blue guitar, evocative of the euphoric heights of idyllic summer love."

"I’m 14 years old, on a road trip with my girlfriend’s family and we’re sitting in the back seat. Joni Mitchell’s Free Man In Paris comes on the radio and I’m suddenly no longer concerned with our clumsy, barely post-pubescent fumblings. There is only that sweet voice on the stereo, gliding effortlessly on wings of smooth 70s studio production. We broke up a week later but I still listen to Joni."

Jimi Hendrix - All Along the Watchtower

"As a kid I played piano and clarinet, not exactly the instruments that rock'n'roll dreams were made of in the 1990s. One day I got my hands on Jimi Hendrix’s Greatest Hits CD and when I heard the guitar solo on All Along The Watchtower, a sonic tower in acid-dipped technicolour, I knew I had to put the liquorice stick down and pick up a guitar."

The Beatles - You Never Give Me Your Money

"I was always a Paul guy. I even had a copy of Venus & Mars before I had any Beatles records. For me there’s nothing better than side two of Abbey Road.

"The mini medley of You Never Give Me Your Money features all the McCartney trademarks of nonsensical rhymes (“1-2-3-4-5-6-7 all good children go to heaven”), different singing voices (the Lady Madonna voice on “out of college, money spent…”) and enough hooks and melodies for two or three songs all stuffed into one."

Delaney & Bonnie - Only You Know and I Know

"When we started our band everyone kept telling us we sounded like 'Southern Rock', so I thought I’d better check the genre out. I bought a two CD compilation of Southern Rock Gold, a mostly ham-fisted collection of clunky Southern anthems.

"Fortunately, the first song was Only You Know And I Know, a rollicking good-time number, featuring the dynamite vocal tandem of Delaney & Bonnie. They provided a blueprint for how to play rock'n'roll with soul and country leanings and I learned a lot about singing from Delaney, who apparently taught Eric Clapton how to sing."

"My parents weren’t exactly rockers. We didn’t listen to the Stones or Zeppelin in our house, but they would play Creedence. The song that always registered with me was Proud Mary. It sounded like a song that had been around for a hundred years.

"Concise, timeless, evocative, it’s precisely the type of song I strive to write. Deceptively simple, you could program ten thousand supercomputers with songwriting algorithms for a millennia and they would never produce a more perfectly crafted piece of art."

Stevie Wonder - Living for the City

"We always heard a lot of Stevie in my childhood home, especially Innervisions. I can recall being especially struck by the seven minute epic Living for the City, which is nothing short of cinematic.

"For the first time I considered more than just the sound of what I was hearing. My developing 10-year-old brain was engaged equally by the social message as it was by the story-telling possibilities of song."

Led Zeppelin - Over the Hills and Far Away

"I didn’t listen to Led Zeppelin in earnest until I borrowed a box set from the older brother of a friend in high school. Needless to say it clobbered me over the head like Bonham pounding away at his kit.

Over the Hills And Far Away perfectly encapsulates my very favourite Zeppelin thing: the calm before the storm. All nimble acoustic guitar work and gentle Plant vocalisations before the hammer drops and it’s nothing but big time riffs all the way home."

"When I was a 13 year old clarinet player I wasn’t exactly beating back the female suitors, but I found some refuge in the gloriously horn-filled rock'n'roll of Chicago.

"The first song on their first album (when they were still called Chicago Transit Authority) is a seven minute highlight reel of the band’s strengths. Hard charging grooves, dynamic soloing, a quick detour for some easy going balladeering and then a mad dash for the finish line."

"As I get older the more I appreciate smooth music and it doesn’t get any smoother than the effortlessly divine vocals of Bonnie Raitt. Thank You is from her incredible self-titled debut, an album I bought for $2 on a whim one sunny afternoon roaming around San Francisco.

"Whether I need instant chill on a stressful travel day or laid-back accompaniment for a backyard BBQ, it remains an album for all occasions."

The Sheepdogs released their sixth studio album Changing Colours last year. Check out the charming video below for the single Saturday Night, produced by bassist Ryan Gullen in conjunction with a local legion in the band's home-town of Saskatoon, Canada.