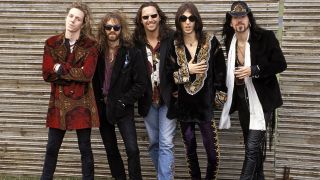 Last month, online reports began to emerge suggesting The Black Crowes could be about to reform.

The Wall Street Journal reported that the band’s former manager Pete Angelus said he was was aware of a deal that brothers Chris Robinson and Rich Robinson “made with Live Nation for a 2020 tour,” although at the time, Live Nation told the site they didn’t have “any intel” on a possible run of live shows.

However, just last week the band’s social media channels lit up with a Black Crowes cartoon graphic – and the same image has now begun to appear on billboards in the US, suggesting that something is indeed happening behind the scenes.

The Milwaukee Journal Sentinel report that the logo has appeared alongside the I-94 in the city, while JamBase show the same logo in New Jersey at the entrance to the Lincoln Tunnel.

Next year will mark the 30th anniversary of the band’s celebrated debut album Shake Your Money Maker, although if a reunion is indeed on the cards, it looks unlikely that drummer Steve Gorman will be involved.

He told UCR: “This reunion, I’ve heard from many sources for several months that this is happening. “This ain’t got nothing to do with trying to re-find a musical connection. This is a very different motivation and impetus, so the last thing that the brothers Robinson are going to do is involve someone who is going to take a chunk of the pie away from them.”