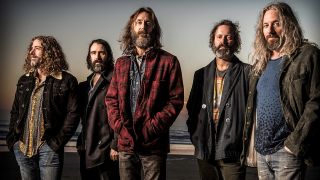 “I have a lot of stories to tell and we’re having so much fun,” declares Chris Robinson. “If this band is our garden, all we have to do is tend the vegetables – we don’t have to deal with any showbiz trips or ego trips. This is where we live and we’re a family. And we built this little caravan that goes around and lays out the vibes.”

With CRB, nothing is off limits. Which probably goes some way to explaining why they’re so prolific. Since the summer of 2012, the Brotherhood have released five studio albums, a mini-LP and three hefty volumes of live recordings. They’ve also racked up hundreds of gigs and curated their own annual festival.

Not burdened by nostalgia, hit singles or the demands of a major label (everything is issued through Robinson’s own Silver Arrow imprint), the five-piece exist outside normal industry protocol. And, as befits what they call their farm‑to-table aesthetic, they’ve gathered around them a large group of like‑minded devotees.

The creative hub of this autonomous micro-empire is the Brotherhood Arts Lab, a studio space fixed to a mountain overlooking the Pacific Ocean. Robinson has even given it a suitably mystical name.

“The origin of our little absurdist community relates to the fact that we heavily identified with California being the backdrop to this music,” he explains. “So I thought we needed to invent a place in our minds, which was Unicorn, California. The Brotherhood Arts Lab is kinda like wherever we were at any time. In this case we have this small cottage industry going, where we’re allowed to make these recordings, find this space where we can all get together, keep out the reality of the regular world and really express ourselves in a dynamic, energetic way.

“The cool thing about the real Brotherhood Arts Lab, where we’ve made our last two records, is that it is a magical place. There’s something about the view and the vibes. It’s all about keeping something flowing. We’re free to do whatever we want, which was always my ultimate dream.”

Robinson knows this sounds like a throwback to some Aquarian idea of a hippie idyll. But essentially that’s what it is, made real. Having been a part of one of the biggest American rock bands of the past 30 years, he’s also perfectly placed when it comes to judging where he needs to be.

“The Black Crowes was more regimented to what other people expected from the songs,” he says of the group that sold 35 million albums before splitting for good in 2015. “So since we hatched this cosmic egg that is the CRB, I’ve never told anyone what to play. Everyone just picks up and starts doing their thing. I’m in a band with people who are all attuned to the same wavelength. We invented this music on the fly, which gives it wings. We live on the bus together, we’re out doing around a hundred and twenty shows a year, we produce our own records and we’ve never had an argument.”

This year shows no let-up in the Brotherhood’s work rate. Not only are they touring across the US until mid-December, but they’ve also just unveiled the next instalment of their Betty’s Blends live series (recorded and mixed by Grateful Dead archivist Betty Cantor-Jackson) and have completed a new studio album.

Barefoot In The Head continues their purple patch, offering a radiant vision of Americana that manages to salute the past while beating fresh paths into the future.

“I tend to write these folky sort of songs, rudimentary things, really,” says Robinson. “But our thing has always been: ‘What if Buck Owens’s band had Tim Blake and some Gong in it? Or what about Waylon Jennings and Mwandishi-era Herbie Hancock jamming together?’”

Robinson admits that he could never have made music like this with his former band. “The Black Crowes was an experience that happened to me,” he reflects. “You work hard, write songs, get a deal, put your money in the slot – kerr‑ching! It came up cherries! And I’m not knocking it. But the CRB is something that we built, and I really enjoy the scale of it. We have the luxury of not being anybody’s good‑time summer radio hit, so even though we’re in our fifties, it’s still something that’s kind of underground.

“A lot of people told me I couldn’t do this. But the whole point was that it’s brick by brick with us. Our shows and songs are still a part of the living mythology that’s happening now.”

Why Chris Robinson traded the music industry for artistic freedom