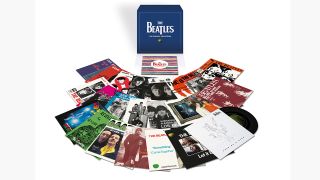 Hot on the heels of the Beatles’ 50th anniversary reissue of Abbey Road comes news that a new box set is on the way.

The Beatles: The Singles Collection will be released on November 22 through Apple Corps Ltd/Capitol/UMe and will bring together all 22 singles released by The Fab Four between 1962 and 1970, with each 7-inch disc pressed on heavyweight 180g vinyl.

The double a-side single featuring Free As A Bird and Real Love, which launched in the mid-90s, will also be included, bringing the total number of tracks in the collection to 46.

Each song has been newly cut for vinyl from the original mono and stereo master tapes by Sean Magee at Abbey Road Studios, with each single presented on faithfully reproduced picture sleeves from around the world.

Also included in the box set will be a 40-page booklet featuring photos and essays by Beatles historian Kevin Howlett.

To mark the news a trailer for The Beatles: The Singles Collection has been released. Find it below along with a full tracklist and pre-order details.

The new edition of Abbey Road reached no.1 earlier this month, 49 years and 252 days after it first reached the top spot .

The achievement has been officially recognised by the Guinness World Records for the longest time for an album to return to the top of the album charts in the UK.

The Beatles: The Singles Collection

The Beatles: The Singles Collection
All 22 of the Beatles singles from 1962 and 1970 are included in this new box set. The collection will also include Free As A Bird and Real Love, which launched in the mid-90s along with a 40-page booklet.View Deal