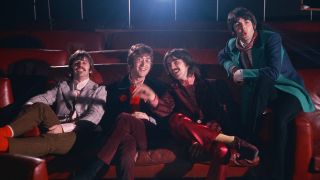 At the end of last month, the Beatles’ classic 1969 album Abbey Road was reissued as a deluxe box set to celebrate its 50th anniversary.

It went straight in at no.1 on the UK album charts – and it’s broken a record in the process.

Abbey Road spent a total of 17 weeks at the top of the UK charts after its release in September 1969 and by reaching the no.1 position once again after 49 years and 252 days, it’s been officially recognised by the Guinness World Records for the longest time for an album to return to the top spot in the UK.

On hearing the news, Paul McCartney tweeted: “It’s hard to believe that Abbey Road still holds up after all these years. But then again, it’s a bloody cool album.”

Meanwhile, it’s been reported that long-lost Beatles footage has been discovered in a bread bin during the clearance of a house in Wales.

It’s not the first time rare memorabilia has been found in a bread bin. In 2018, a 1963 recording of I Never Dreamed featuring David Bowie and his band The Konrads was discovered stashed away.

It’s hard to believe that #AbbeyRoad still holds up after all these years. But then again it’s a bloody cool album... https://t.co/1DzrRyCgFBOctober 4, 2019