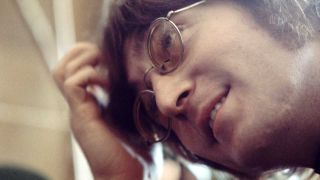 I wasn’t allowed to go to see The Beatles in concert when I was a kid. My parents thought pop concerts were attended by the wrong sort of people. So I never got to see the 20th century’s biggest phenomenon live. But from the moment I heard Love Me Do on the radio, I knew this bunch of guys were magic… that they voiced all my hidden joy and yearnings as a teenager struggling to make his way into the world of the ‘60s.

It is impossible to doubt that the combination of the four lads was unique, a piece of magic in a million - the perfect rock group to inspire all rock groups, and rewrite the framework of not only popular music, but the whole culture of the young. But, as time went on, it became apparent that John Lennon was at the heart of this awesome power.

Standing next to the melodic genius of his pal Paul McCartney, the emerging spiritual fire of George Harrison, and undoubtedly the most original drummer of his day, Ringo Starr, it was the acerbic Lennon who kept The Beatles firmly out of the trite, and into the extremes of dangerous creativity.

There is not enough space here to come closes to chronicling all Lennon’s masterpieces, but check out Tomorrow Never Knows, Lucy In The Sky With Diamonds, and then I Am The Walrus and Strawberry Fields Forever and tell me you do not gasp… Never has anything been created like these works in the whole of history.

Lennon, from a frankly less-than-glamorous teenager with a bit of a chip on his shoulder, developed into the coolest guy on Earth. He was cool enough to write the greatest teen pop song ever (in my humble etc,.) I Want To Hold Your Hand; to embrace psychedelia and make it musically valid; to leave The Beatles when he felt it had all become a shallow game he didn’t want to play anymore; and then to put his whole being into promoting peace in his solo work, producing almost certainly the greatest, most daring and personally revealing solo albums ever made, including songs such as Jealous Guy, the soul-bearing God, and the immortal anthem for mankind, Imagine.

Lennon, for all of us post-revolution (whatever that was…) musos, was, is, and always will be… IT. I rest my case.