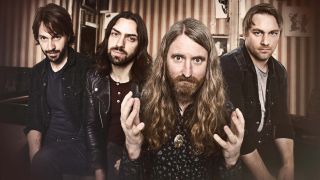 The Answer have confirmed the release of fifth album Raise A Little Hell, and an accompanying UK tour, for March next year.

And guitarist Paul Mahon described the work as a “reboot” of the Northern Irish outfit, vowing that they “have the hunger back.”

The follow-up to 2013’s New Horizon will be launched on March 9 via Napalm Records. It was recorded in Madrid with producer Will Maya.

Mahon tells TeamRock: “Our third album, Revival, wasn’t what people wanted from us. We paid a lot of attention to that and it set us on our way. On New Horizon we cleared the decks and the trauma of all the changes is behind us.

“We’re a lot more confident now – we’ve taken a few side roads to get where we want to be, but we’re here now and ready to deliver.”

He namechecks two tracks to watch for on the coming title. “Long Live The Renegade has a little touch of everything we’ve done over the years. It’s a touch AC/DC, The Who and Cream. It’s everything good about the band in three and a half minutes. We also have a balled, Strange Kind Of Nothing, which was kicking around for some time and took a while to get right. It’s cinematic, but it still sounds like a rock band.”

Mahon adds: “The record has retained our heaviness, but we have more of the groove of the first two records. In 2015 we want to play to more people – and we’d like to show people we are still one of the best rock’n’roll bands in the business.”