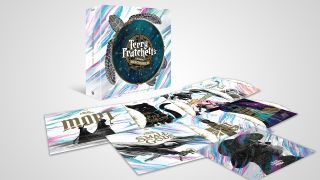 A collection of Terry Pratchett’s Discworld novels are coming to vinyl for the very first time.

The 15-disc illustrated box set will be released through the BBC on November 29 and will contain Mort, Wyrd Sisters, Guards! Guards!, Eric, Small Gods, Night Watch and the bonus non-Discworld tale Only You Can Save Mankind.

The yarns have been brought to life by Anton Lesser, Sheila Hancock, Martin Jarvis, Melvyn Hayes, Philip Jackson, Alex Jennings, Geoffrey Whitehead, Patrick Barlow and Mark Heap with Death “as ever, played by himself.”

Every disc of the BBC Radio dramatisations have been pressed on heavyweight 180g ‘DiscSwirl’ vinyl, with each of the seven gatefold sleeves containing liner notes from Stephen Briggs – the co-author of The Discworld Companion.

A recreation of the Discworld map also features across the 15 printed inner bags, while Night Watch and Only You Can Save Mankind will include themed etchings on the b-side.

The box set is now available to pre-order. Find further details below.

In 2013, Pratchett teamed up with Steeleye Span for their Wintersmith album – a record largely inspired by the Discworld novels which also featured narration by the late author who died in 2015.