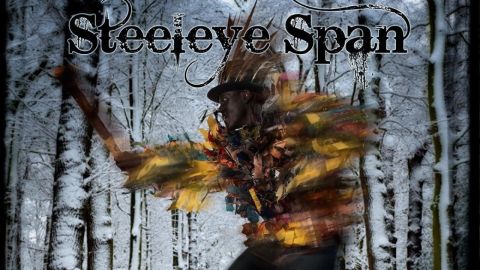 Old folk-rockers don’t die, and they don’t always fade away either. Thus the extraordinary blooming of Steeleye Span in the supposed autumn of their career, extending to a fifth new album inside a decade. Now, four years after Cogs, Wheels and Lovers, this genuine British institution not only gives the finger to any conventional notion of conking out, but they have also completed perhaps the most audacious collaboration of their 43-year recording career.

While we may be in another universe to their chart years of Parcel of Rogues, Now We Are Six and the like, the Span of 2013 have found a new place to dwell. It’s one with reassuring reminders of their old place, but the furniture’s all been updated.

Central to the sonic redesign is the connection with a lifelong Spanner, Sir Terry Pratchett. The Discworld creator writes engagingly in his sleeve note that, when he was a lad, his mate Dave sat him between giant speakers, turned everything up to 11 and played Boys Of Bedlam (from 1971’s Please To See The King) “until the chimney wobbled”. The note continues amusingly about Pratchett’s patent devotion to the band, and how, when he found out that Maddy Prior was a fan of his, he suggested the marriage of their music and his words. These are the vivid and compelling results; _“the days of mystery and myth, these are the ways of the Wintersmith”. _

The modern-day Steeleye sees long-servers Prior, Peter Knight, Rick Kemp and Liam Genockey joined by Julian Littman and the much-travelled multi-instrumentalist Pete Zorn. From the atmospheric and premonitory Overture onwards, it’s a cohesive and vital unit here, with Knight’s violin taking the lead in a percussive, premonitory opening scene. As The Dark Morris Song kicks in, it is immediately clear that, with Pratchett’s words weaving around the band’s fiery new music, we’re in a world of futuristic folk. Perhaps the production is more in-your-face than some old-school fans might expect, but there’s nothing for Span’s season ticket holders to fear here, even if the weather forecast suggests taking a coat, as ‘ancient incantations call the North wind down’.

Wintersmith itself, described on the sleeve as “the Legend of the Cold Entity”, sounds like a dark anthem in the making, and quite rocky in aspect with Littman’s strident electric guitar. The altogether gentler You introduces romance for the first time, as the Wintersmith ’fesses up his feelings for the one called Tiffany, while Prior’s lovely lead on The Good Witch adds to the accordion and fiddle detail with fragrant effect. And then, who should be telling us not to judge a witch by her cover, in his inimitable style, but Sir Tel himself? “Cackling is not just nasty laughter,” he says. Indeed, in this world, it means much more.

What emerges by this point is a thematic album based on a typically fascinating sphere of colourful vagabonds and shadowy forces. But the theme is not so all-enveloping as to suffocate the listener, the proof being that each track works as an individual listen. Produced by the ensemble and mixed by the redoubtable Chris Tsangarides, there’s even the occasional sing-song, such as The Wee Free Men, in which they sing ‘_No King, no Queen, no Master, we’ll not be fooled again’. _They come across like some agrarian incarnation of The Who…

The album’s second half often has a gentler tone than the first, notably on The Making Of A Man, with its collective vocals. Things get rocky again with the tune Crown & Ice, which soundtracks the Wintersmith’s intentions of making Tiffany his Queen of the Winter World. She dashes those hopes, in Prior’s voice, on First Dance, before the call comes for The Summer Lady to end the chilly reign of the titular character.

References to Discworld inhabit Ancient Eyes, while the valedictory We Shall Wear Midnight has Tiffany foreseeing union in the afterlife — not, according to the album notes, with the Wintersmith but with Pratchett himself. Perhaps it was him all along? In any case, the key to Wintersmith is that you don’t need any prior (sorry) knowledge of Sir Terry’s work to enjoy this mélange of ancient and modern imagery and musical illustration.

And if this album doesn’t enhance the Span legend, I will eat All Around My Hat…