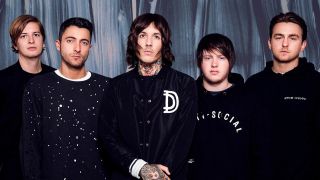 Bring Me The Horizon frontman Oli Sykes has urged fans to help prevent the closure of a Greek animal rescue facility.

The Santorini Animal Welfare Association is facing closure, with the prospect of dozens of dogs being dumped on the streets of the small island.

And the singer, who adopted a dog from the facility while the band were recording fifth album That’s The Spirit, wants fans to contact the local mayor to urge him to change his mind about the decision.

Sykes says: “The shelter is amazing and they do so much for Santorini’s dog population. They even go as far as rehoming dogs to Germany, Sweden, Denmark and the UK.

“However, the shelter is under attack again. The mayor has decided to close down the shelter because they don’t give a single fuck about the lives of animals and feel that SAWA is a ‘sore sight’ for Santorini – even though it’s in a very remote location.”