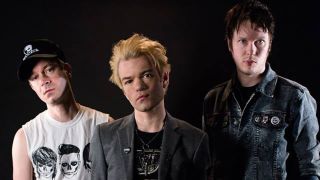 Sum 41 have launched a crowdfunding campaign for their sixth album.

The Canadian punk rockers are working on the follow-up to 2011’s Screaming Bloody Murder – and frontman Deryck Whibley says he has plenty of motivation after his recovery from an alcohol-induced near-death experience.

“Now, two years later and with everything I’ve gone through, I do have something to say. Now I’m ready.”

A range of options are available for fans to purchase via their PledgeMusic page, from a digital download to the opportunity of watching the band work in their studio.

Whibley adds: “Words can’t describe how good it feels to be back, so I’ll just let the music do that instead. It’s been a crazy few years for all of us in one way or another, but Sum 41 is back – and stronger and more excited than we have been in a long time.

Earlier this month he played three solo shows in California to mark his return to live action. The band play the Alternative Press Music Awards in Cleveland, Ohio on July 22, before a set at Festival Rock al Parquet, Bogota, Colombia on August 15.