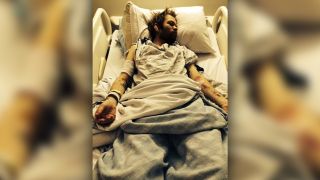 Sum 41 frontman Deryck Whibley has been warned by doctors that one more drink will kill him.

He reports he’s been in hospital for a month after a lifetime of boozing caught up with him and caused his liver and kidneys to fail.

Whibley says: “I was drinking hard every day until one night I was sitting at home, when all of a sudden I didn’t feel too good.

“I collapsed to the ground, unconscious. My fiancee got me rushed to hospital, where they put me into the intensive care unit. I was stuck with needles and IVs all over – I was completely sedated the first week.”

He admits the experience “scared me straight” and adds: “I finally realised I can’t drink any more. If I have one drink, the docs say I will die.”

He warns: “I’m not preaching or anything, but just always drink responsibly. I didn’t – and look where that got me.”

Whibley, 34, reports that despite his health issues he’s in good spirits. “I have my passion and inspiration back for writing music,” he says. “I already have a few song ideas. Soon it will be time to start making an album and getting back to touring again.”