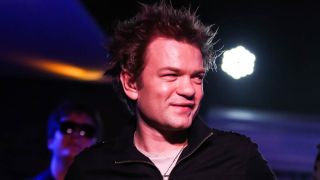 Sum 41 frontman Deryck Whibley will play three solo shows in California this month before rejoining Sum 41 for live dates as he makes a comeback following a battle with alcohol that almost cost him his life.

The singer was hospitalised in early 2014 after his liver and kidneys collapsed due to years of drinking. Whibley was put into an induced coma and later warned that even one more drink could kill him.

In April, the frontman updated fans on his recovery while revealing “I am dying to get onstage. That’s the only thing that’s been keeping me going – music is really the only focus I’ve had since being in the hospital.”

Set to perform under the name Deryck Whibley And The Happiness Machines, the singer will be joined by My Chemical Romance bassist Mikey Way for the three-show run.

Whibley says: “Hey everyone. I’m really excited to be getting back on stage for some warm up shows in Cali. I haven’t been on stage in a long time, so me and some of my good friends are gonna get up and jam some Sum 41 songs.”

Way posted the news on Instagram, saying “My dude, Deryck Whibley, is playing some shows around town and I’m looking forward to joining him for a few songs!”

Following the solo dates, Whibley will rejoin Sum 41 for a pair of live sets, including a July 22 appearance at the 2015 Alternative Press Music Awards in Cleveland, OH and an August 15 stop at Festival Rock al Parquet in Bogota, Colombia.

Sum 41 have been in the studio working on tracks for their sixth album, the follow-up to 2011’s Screaming Bloody Murder.

DERYCK WHIBLEY AND THE HAPPINESS MACHINES

Jul 03: The Constellation Room at The Observatory Orange County, CA