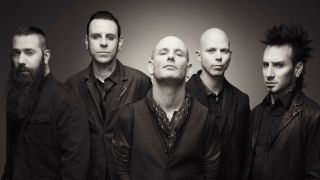 Stone Sour released their new covers EP Meanwhile In Burbank via Roadrunner on Monday 28th April, but they’re also streaming it via YouTube.

At five tracks long it features covers from Metallica, Kiss and Alice In Chains. Recently frontman Corey Taylor confirmed the band were working on two more EPs titled Straight Outta Burbank and No Sleep ’Til Burbank, that will feature covers of Bad Brains and Rage Against The Machine.