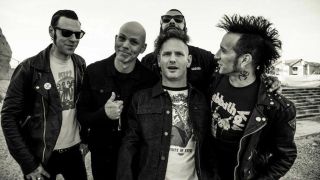 They released Meanwhile In Burbank… to mark Record Store Day on April 18 – and the Slipknot singer says there’s more to come.

He tells the Jasta Show: “The second one’s called Straight Outta Burbank and the third one’s called No Sleep ’Til Burbank – three EPs, five tracks each.

“We just want to share some of these songs that we grew up loving and we want to pay homage to the bands that got us into music in the first place.”

He adds: “The next album’s got everything from Bad Brains to Motley Crue, and the third one is going to probably have Violent Femmes to Rage Against The Machine.”

While Taylor won’t go into detail about specific tracks, he hints the Violent Femmes cover could be Add It Up from their 1983 debut album.

He also indicates there are plans to release Meanwhile In Burbank… to a wider audience at some point but says, “I’m not sure when.”

Taylor and his Slipknot bandmates will headline Download on the weekend of June 12-14.