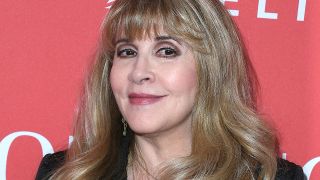 Stevie Nicks says she’s working on a project based around Rhiannon.

Nicks’ wrote the track in 1974 after stumbling upon Mary Leader’s book Triad: A Novel Of The Supernatural, which contained a story about a girl who becomes possessed by a spirit named Rhiannon.

It would go on to appear on Fleetwood Mac’s self-titled album the following year – Nicks and Lindsey Buckingham’s first record with the band – and has become one of the group's best-loved songs.

Speaking previously with Classic Rock, Nicks revealed that it was only after the song was written did she discover more about the character of Rhiannon, who features in the book of Welsh mythology, The Mabinogion.

Now, Nicks will delve deeper into the fable of Rhiannon with her new project.

Nicks tells Rolling Stone: “I had planned to take this year off. We’ve been on the road one way or another, whether it was me or whether it be with Fleetwood Mac, basically since 2009.

"Last year I made a pitch to everybody that when this Fleetwood Mac tour is over, I’m taking next year off because I want to work on my Rhiannon book and movie. And I want to maybe work with some different producers… I don’t know what I want to do! I just know that I don’t want a tour!"

Nicks says that she’s been working on ideas during the lockdown, and says: “I have some Rhiannon poetry that I have written over the last 30 years that I’ve kept very quiet.

She adds: "All we have right now, if you’re home in quarantine, is time, unless you’re taking care of kids. So, really, you could do anything you wanted that you’ve been wanting to do your whole life. So that’s how I’m trying to look at it."

Read Classic Rock's story behind Rhiannon, which was originally published in 2015.