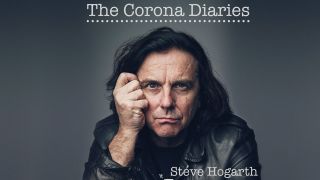 Marillion singer Steve Hogarth has launched a new podcast series, The Corona Diaries. The idea came from Hogarth's ideas to narrate his The Invisible Man diaries, of which there have been two volumes so far, although just as he'd hooked up with podcast producer Anthony Short, the coronavirus took hold, adding a new slant to the project.

"I have shied away from things like this in the past, mainly because I was concerned I wouldn't be able to commit the time and ensure it turned out as well as it could," explains Hogarth. "But then I was chatting to a friend who suggested a podcast. So, just for a lark, we decided to record a test-episode and it all turned out pretty well. I had the idea that as part of the project I wanted to narrate my diaries, which we will be doing, as well as just chat about things that are going on with me and that have shaped my life and career. At the time of recording I was still struggling with a name, but as these first few episodes were recorded just as the country try went in to pandemic lockdown, The Corona Diaries became an obvious choice."

There are currently a pilot and two full episodes to listen to at the link below.

"It’s a very relaxed affair," adds producer Anthony Short. "Steve is warm, funny & very articulate and of course he has stories by the sackload. The first episode covered the backstory to the lyric from a Marillion song called This Strange Engine, as it is largely autobiographical and it seemed a good place to start. Episode two will feature a foray into Steve’s influences and the bands and gigs that shaped his musical journey."

Listen to The Corona Diaries.