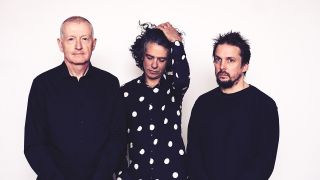 Former World Snooker champion Steve Davis and Gong/Knifeworld's Kavus Torabi's new musical outfit, The Utopia Strong, have released the first new music. You can listen to the ten-minute long Brainsurgeons 3 in full below.

The pair, along with Coil/Guapo member Michael J. York, will release their self-titled debut album through Rocket recordings on September 13.

“The band evolved from having had so much fun together and also sharing similar musical tastes,” former Prog columnist Davis told us. “Mike was living in Glastonbury where Kavus and I DJ’d in 2017. We all hung out together during the festival and the Utopia Strong was born. The name came later and I suppose reflects the fact that - once we’d jammed together and listened back to the improvising - the music felt pretty euphoric and otherworldly. It was very psychedelic but also strangely wonky”

“The overall sound was pretty accidental,” adds Torabi. “I certainly didn't expect the music to sound so ecstatic and positive, Without wanting to puncture the mystery, there really felt like an element of magic at play in making this album. For the most part it was incredibly effortless.”

Davis and Torabi are both known for their prog rock radio show Interesting Alternative on Phoenix FM. The pair began DJing together in 2016, and The Utopia Strong has grown out of that. The sound mixes progressive rock, Krautrock and modern electronia. The forthcoming album also features a contribution from Medieval Baebes member Katherine Blake, who supplies vocals tot he song Moonchild.

“In twenty years of making records it's certainly been the easiest and most enjoyable to make,” reflects Torabi. “Now, this may have been partly due to us having no preconceptions or expectations but it wasn't just that. There was absolutely no conflict, and we spent a lot of time together working on it - in my experience that's a total fucking miracle.”

“The personal journey I’ve been on since January 2nd 2018 with Kavus and Mike has been surreal,” says Steve. “Probably more so than even the path that unfolded for me in snooker. That was pretty far out but this seems otherworldly! Maybe Glastonbury is a mystical place after all."

The Utopia Strong have lined up the following live shows: