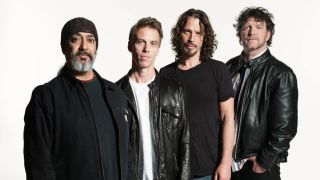 Soundgarden are to release their recent rarities collection as a 6-LP vinyl set.

Echo Of Miles: Scattered Tracks Across The Path was issued as a 3-CD package last year, and the vinyl set will be released on May 19. It is available to pre-order now via the band’s website at a cost of $140 (£95).

The six LPs will be housed in three separate jackets, each sporting its own unique art and housed in a slipcase wrapped in foil paper.

The collection was curated and hand-selected by guitarist Kim Thayil. It includes rarities that have appeared as B-sides, album bonus tracks, EPs, soundtracks, compilations and live recordings.

As with the earlier CD package, the vinyl version of Echo Of Miles features three collections – called Originals, Covers and Oddities. Included is new song Storm, recorded in 2014, plus covers of tracks by The Beatles, The Doors, Black Sabbath and more.